Commercial Trends to Act on in China’s Pharmaceutical Industry

The slowdown of recent growth in the Chinese pharmaceutical market demonstrates potential for Western companies to partner with their Chinese counterparts for mutual benefit.

In Chinese astrology, the Year of the Ox is traditionally meant to herald a time of prosperity.

Looking back over the last few years of development in the Chinese pharmaceutical industry, it would likely require a considerable upturn in fortunes to return the industry to the heady days of 2012, when growth peaked at 25% while it dipped below 2% in the rest of the world (RoW).

Today, Chinese growth edges ahead of that of the RoW, but the difference is no longer as stark as it was
nearly a decade ago.

Big Pharma eager for a slice of the action in China would do well to understand the reason for this convergence and stabilization, as it answers questions about how to enter a market that has been notoriously difficult to crack.

The size of the Chinese market

Today, China is the world’s second-largest drug market, representing 8.5% of global sales. Within China, opportunities for profit have diversified in the recent years. In 2015, just 16 companies recorded annual revenue greater than ¥10 billion; according to the latest figures from the China National Pharmaceutical Industry Information Center, there are now 27 companies of this size, which is likely due to the consolidation and centralization of smaller companies.

As for who owns these companies, the data indicate China is still largely a closed shop. Of the top 100 pharmaceutical companies, 82 are domestically funded, suggesting that Western investments are treated with caution. 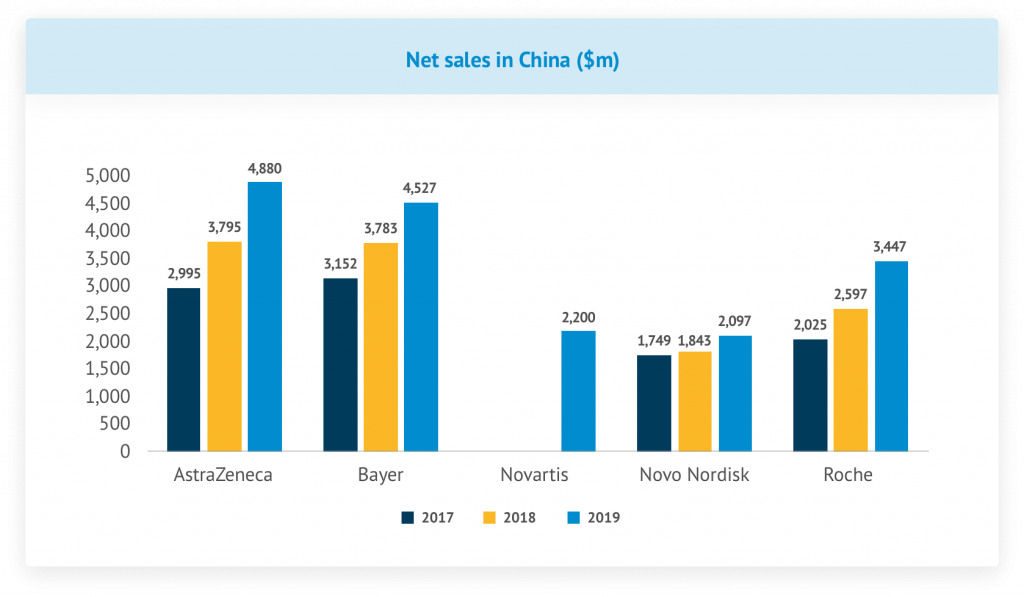 On the face of it, this is great news for China’s pharmaceutical industry. So where are the sticking points and how can Western companies step in?

While China has long held a reputation of being the world’s manufacturing hub, the principles of rapid turnaround, low prices and high volume have come at the expense of quality; this has always been an essential part of the pharmaceutical industry, and while China is making efforts to address the lack of quality, it is a matter of turning an oil tanker rather than flipping a switch.

At present, the major opportunities for partnerships between Chinese and Western companies appear to be within the generic and patent medicines markets, as OTC medicines could be compromised by government schemes aiming to improve access to prescription medicines. This could reduce the demand for OTC drugs, eventually leading to a decline in the market share over the long term.

Partnerships within the generics space are set to become particularly appealing on both sides of the arrangement: China brings rapid manufacture and market knowledge, while Western companies bring trust and quality control. Notable examples of such partnerships include the 2017 joint venture between Teva and Guangzhou Pharmaceuticals to sell generic medicines in China, giving Teva a foothold within the country; in contrast, the partnership between Zhejiang Hisun Pharmaceuticals and Pfizer to jointly manufacture and commercialize off-patent products in the global market has allowed Zhejiang Hisun Pharmaceuticals to reach beyond its borders.

Patent medicine, meanwhile, is China’s second-largest product segment, but that high profit comes with a few strings attached: High R&D costs, long R&D phases and long return periods. The main growth driver in this market is the reform of healthcare ushered in by the government; however, this is likely to mean that markets are niche, dominated by domestic players and only the most dedicated of foreign MNCs.

For Western companies attempting to make inroads into this market, price has been seen as the primary obstacle; players like BMS (Opdivo), Merck (Keytruda) and Roche (Tecentriq) have been aggressively cutting prices and adding value in order to gain an edge over local competitors and get ahead in China’s National Reimbursement Drug List (NRDL).

Dark matter in the pharmaceutical universe

For many years, the Chinese market has felt like dark matter in the universe; we know it is there, but it has been impossible to locate, with only tantalizing glimpses of data to reassure us that it is not a figment of the imagination. Discovering this market is like drawing back a blackout curtain on a sunny day to see the truth: China is not just another Asian geography; it has the potential to match and perhaps even outstrip the US in terms of market share.

Pharmaceutical companies want to go into China and make changes, and major reforms are afoot from within the country itself. China is not a sustainable ecosystem, and new oncology drugs are just one example of how Western companies can make inroads into the Chinese market.

Chinese companies are keen to leverage these partnerships, partly because of the access to markets in the RoW, and also because of the perception that Western companies produce better drugs with better techniques, products, services and science.

China’s government itself is supporting change through regulatory reforms, creating demand for drugs that only Western companies can currently provide. The barriers between drugs and patients are not money or desire – they are bureaucracy and culture.

The trend over the coming years, therefore, will be joint ventures: Marrying Western quality with Chinese market understanding and penetration. While 2021 is the Year of the Ox – solid, steady and dependable – 2022 will bring the Year of the Tiger. As the world moves out of lockdown, it will be interesting to see whether the traditionally insular China will be changing its stripes and widening the opportunities for engagement with the West.